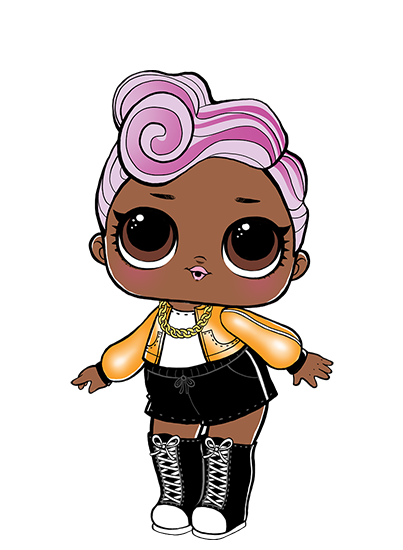 Family
She has an older sister named 24K D.J.
She has a lil sister named Lil D.J.
She has a dog named D.J.K9
She has a rabbit named D.J. Bounce
She has a cat named D.J.K.T.
She has a hamster named D.J. Hammy
Appearance
Series 2
D.J. has brown skin, dark brown eyebrows, light pink lips, and brown eyes. Her light pink hair is worn on the top of her head in a large swirl streaked with a darker pink. She wears a white top with a gold jacket with black cuffs, black shorts with a white line on each side, a gold chain around her neck, and black knee-high boots with white details.

Glam Glitter
She has glittery brown eyes, and metal lights pink hair in the same style with a gold streak. She wears a white t-shirt with black lines around the collar and sleeves, a gold no-sleeved jean jacket, a black skirt, a studded gold bracelet, a black chain around her neck, and gold flats with white soles.

Accessories
Series 2
She comes with a white bottle with a black lid and a gold coffee sleeve.

Glam Glitter
She comes with a metallic gold bottle with “Missing. Have you seen meow?” written on it and a picture of the missing cat, with a glitter gold top.

D.J. is a fancy big sister from the Hip Hop club

DJ is a Big Sister figure from Series 2. He belongs to the Hip Hop Club. Sophisticated and unusual. He has Brown eyes and Pink hair . 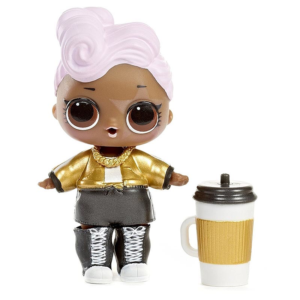 About the Author: melanie